Unbuilt Painting by Zoe Zenghelis. Excerpt from Envisioning Architecture catalogue (essay by Terence Riley): '...Koolhaas, German Martinez, and Richard Perlmutter designed the theoretical New Welfare Island Project for just the southern half of Roosevelt Island (once called Welfare Island). At the top of the aerial view, the Queensboro Bridge passes through a convention center, a monumental gateway to Manhattan. Farther south, a 'tecton'-a Suprematist device from the work of Kasimir Malevich-hovers over a streamlined Art Deco yacht designed in 1932 by Norman Bel Geddes. At the island's tip the six towers of the New Welfare Hotel rise up opposite a wandering fragment of Manhattan that includes Rockefeller Center and Times Square (including the proposed Sphinx Hotel, designed by Elia and Zoe Zenghelis). The New Welfare Hotel, designed by Koolhaas, Perlmutter, and Derrick Snare, is separately rendered in the third drawing; it is a center for dancing, dining, and general urban pleasure. Overall, Koolhaas writes, the Roosevelt Island project 'is intended as a visual interpretation and resuscitation of some of the themes that made Manhattan's architecture unique; its ability to fuse the popular with the metaphysical, the commercial with the sublime, the refined with the primitive.'' (See 1206.2000 and 1207.2000 for the remainder of this essay) (Essay also meant to accompany 1206.2000, 1207.2000, 1209.2000) 'Rem Koolhaas, German Martinez, and Richard Perlmutter designed New Welfare Island for the south end of Roosevelt Island (once known as Welfare Island). This theoretical project extended Manhattan's grid, in this case between Fiftieth and Fifty-ninth streets, onto the island, in a manner similar to that used for Koolhaas's and Zenghelis's Roosevelt Island Redevelopment competition entry. Each newly created lot was intended to support competing structures-formally, ideologically, and programmatically-corresponding to what they viewed as Manhattan's dominant characteristic. Just north of the 'travelator,' a moving pavement extending to the rivers, is a convention center. To its south, amid vacant lots reserved for future use, are Kazimir Malevich's 'Architecton,' an interior harbor housing a 1932Norman Bel Geddes yacht, and a 'Chinese' swimming pool. The New Welfare Hotel, a city within a city, which looks toward Manhattan, is situated at the bottom of the island.' Bevin Cline and Tina di Carlo in 'The Changing of the Avant-Garde: Visionary Architectural Drawings from the Howard Gilman Collection'
Source: ArtStor.com image database 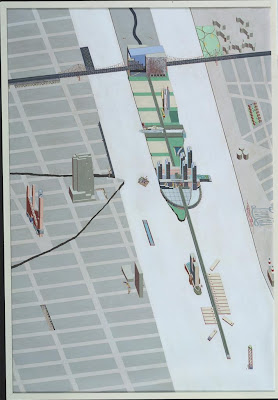