Description Unbuilt "In the context of utopian European architecture of the late 1960s and '70s, Superstudio was the most poetic and incisive group to come out of Italy. Founded in Florence in 1966 by Cristiano Toraldo di Francia and Adolfo Natalini, who were then joined by Gian Piero Frassinelli, Alessandro Magris, Roberto Magris and later Alessandro Poli, the group contributed powerful visions to the international movement that was attempting to design the ideal city of the future. Clearly inspired by the style of the British Pop art movement and the Independent Group, Superstudio displayed remarkable rendering skills in their stunning drawings and photomontages. This image depicts a Manhattan 'by the yard,' a monumental extrusion of the cityscape's profile. In Natalini's words, the Continuous Monument is "a single piece of architecture to be extended over the whole world. [Its] static perfection moves the world through the love that it creates, [through] serenity and calm, [and through its] sweet tyranny.' The members of Superstudio, like many of their architect contemporaries, were searching for a new paradigm for the city. They had an optimistic take on urban sprawl, which today is viewed as simultaneously inevitable, unsustainable, and largely negative but at the time seemed part of a global movement toward urbanization that appeared to many as a glorious model for the future. Quoting Karl Marx, the father figure of communism, and Guy Debord, the theoretician of the society of the spectacle, Superstudio were at once esoteric, youthful, and exuberant. Lying on the border of science fiction, their work was a quintessential product of the imagination and ideology of the period, and still surprises and inspires radical architects today." Paola Antonelli in "Envisoning Architecture: Drawings from The Museum of Modern Art" (New York: The Museum of Modern Art, 2002). "Superstudio was founded by five architects in Florence in 1966, and became the most poetic and incisive group to come out of Italy in the ensuing decade. Their purely theoretical drawings from The Continuous Monument series illustrate their conviction that by extending a single piece of architecture over the entire world they could 'put cosmic order on earth.' In the urban context, The New York Extrusion extends the city's profile over a section of Manhattan, and grafts nature to it by reflecting the blue sky in tops of the buildings. In the other drawings, there are white, gridded, monolithic structures that span the natural landscape to assert rational order upon it. Superstudio saw this singular unifying act, unlike many modern utopian schemes, as nurturing rather than obliterating the natural world." Bevin Cline and Tina di Carlo in "The Changing of the Avant-Garde: Visionary Architectural Drawings from the Howard Gilman Collection" (New York: The Museum of Modern Art, 2002).
Gift of The Howard Gilman Foundation
Exhibitions: The Museum of Modern Art, New York. "Open Ends: Architecture Hot and Cold." September 29, 2000-January 2, 2001. 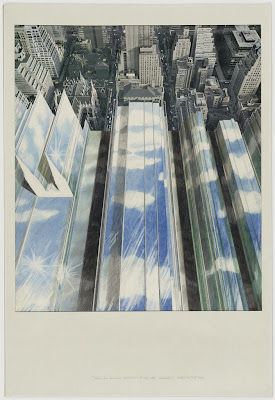