Description Unbuilt Excerpt from Envisioning Architecture catalogue (essay by Paola Antonelli): "Kisho Kurokawa was a leading member of the Metabolist movement in Japanese architecture of the 1960s, a movement reflecting the belief that cities could be designed according to organic paradigms. Metabolist architects hoped that the use of biological processes as models would give them efficient ways to deal with the rapid growth and technological progress of societies all over the world. Their design philosophy involved gigantic buildings, of a size that Le Corbusier had envisioned and sometimes built in past decades. This monumental scale reflected operations they also saw at work in contemporary urban growth; their buildings were to become nodes in the organic fabric of the rapidly growing city. The Metabolist architect Fumihiko Maki is credited with coining the word "megastructure," in an essay of 1961; he defined it as "a large frame in which all the functions of a city or part of a city are housed . . . [the frame is] made possible by present-day technology." For the international movement of architects trying to design the ideal city of the future, "megastructure" became a key word. Kurokawa's impressive Helix City Project envisioned an organic city plan, shown in this drawing, based on service towers connected by an infrastructure of bridges spanning both land and sea. Residential buildings would neatly fill the spaces between, and the pattern could be repeated ad infinitum. Kurokawa, who had worked with Kenzo Tange on his generative Plan for Tokyo of 1960, based his architecture "on the principle of life," he stated in 1998. More than a utopian vision, his Helix City shows an attempt to respond to the dramatic shortage of dwelling space in modern Japan by distributing the built environment in a more structured and sensible way." 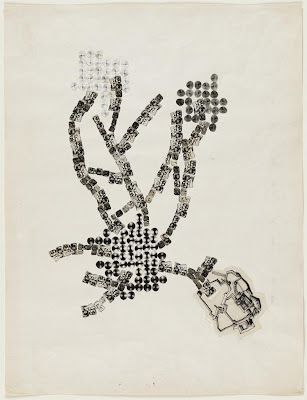