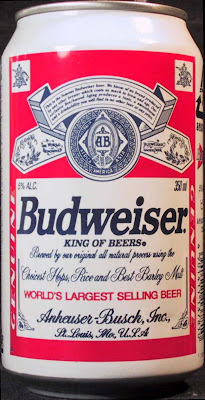 Consider this an introduction to one part of a series of works that encompasses the idea of junk culture: specifically American junk culture. While many artists currently embrace American folk culture in their work, they subsequently ignore the honest source of folk culture. This is not a matter of aesthetically picking out objects, but realizing the cultural entities that define regional groups of Americans; or that define a majority of Americans. Budweiser is an American iconic product.
It is not uncommon to walk into a country gas station or pool hall in South Carolina to buy some brews and find Bud as the only option. A good ol' boy drinks Budweiser- plain and simple. My first beer in 9th grade: Budweiser in a can. The first beer I ever puked: you got it, Budweiser. Want to hang out in a country/western bar and fit in despite your Vans shoes or hippie haircut: hold a Bud. Budweiser is no doubt the common choice for the common southern American.
The Budweiser can of beer is my personal reference to Jasper Johns and American Pop Art. In a sense, Pop Art is/was often an early reference to American folk culture. In 1960, we just hadn't experienced the media and consumer environment long enough to determine how it fit into the larger context of American culture. Johns, in particular, is important to me because of his connection to South Carolina and the University of South Carolina where I earned my BFA in Studio Art. My interest in Johns and his work is what brought me here. What's also interesting with Johns' Painted Bronze, is that no literature considers the possibility that Ballantine may be a reference to his place of birth. Maybe it is, maybe it is not. The fact remains, Johns never revealed any meaning in the work and Ballantine is a town near where Johns grew up. 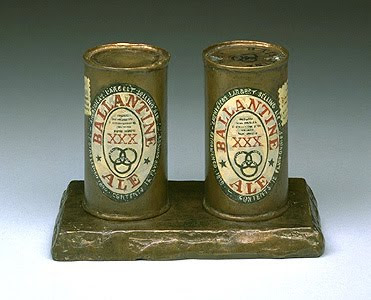