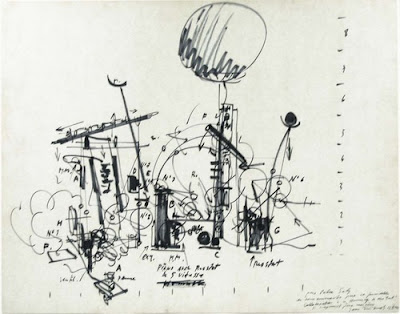 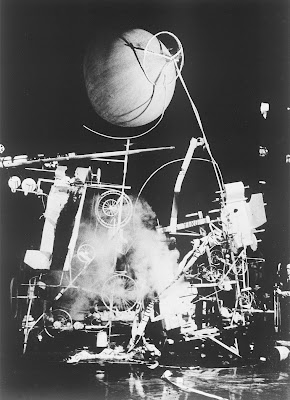 The piano began playing. Jean had reversed the belt for his big meta-matic painting machine which was the centre piece. The painting on the long roll of paper was supposed to spill out over the audience. I could very easily have reversed the belt, but he took my arm away and said "Don't touch, Billy." He had decided that whatever happened should happen. Some time later the weather balloon was supposed to blow up and explode but there was not enough gas in the gas tank we had bought, so it ended up hanging limply. The piano on the right side had a candle on the keyboard which in the third minute was lighted by an overheating resistor. Three minutes later a bucket of gasoline above the candle was tipped over and the piano began to burn gloriously while it was furiously playing away.A small bassinet had been filled with ammonia. When I closed the switch to start the machine, Robert Breer's task was to pour titanium tetrachloride into it. The combination of ammonia and titanium tetrachloride produces, as you all know, white... in this case white smoke, which poured out of the bassinet, until it finally engulfed the specially invited, elegantly dressed audience. It was all over in 27 minutes. The audience applauded and descended on the wreckage for souvenirs. Jean called the event "Homage to New York." Image: Tinguely, Jean (1960). Homage to New York. New York, USA: ArtMuseum.net []
Newer Post Older Post Home